I’m excited to be joining along in this link-up at Leigh Kramer’s blog (thanks for the inspiration, Emily!) because I’ve been wanting for a while to record the books I read, including the best of the children’s books we’ve read.  It’s been fun and stimulating to keep track of what we’ve been up to this month. Here are some of the highlight.

*I had to return Brene Brown’s Daring Greatly to the library since it was on hold for someone else, though I’d only finished about 2/3 of it.  But I wanted to mention it because it’s given me an entirely new and fascinating lens–vulnerability–through which to view both my behaviors as well as relationships.  I expect to write more in depth about it sometime; I’ve already started a few posts based on topics from the book.  Highly recommend, and hope to finish it soon.

*Reading Like a Writer, Francine Prose: emphasizes the kind of close reading that demonstrates how the masters craft their writing; makes me feel like I’m back in graduate school, but without the pressure.

*I’m chipping away at Ivanhoe.  I saw a British film version in high school, but have wanted to read it ever since one of my college roommates claimed it as her favorite book.  I get into it at times, and then hit a slow patch and set it aside for awhile.

*Malcolm Gladwell’s David and Goliath on Audible: Quint and I have been listening to this during car rides.  We’ve listened to several of his audio books on road trips and this one is really fascinating.  Based on the premise that what at first seems like a weakness can actually prove to be someone’s great advantage.  It has provided great fodder for our conversations.

*The Write Start, Jennifer Hallissy: E has started writing the letters of his name, pretty much out of the blue, and this book has great information and ideas for encouraging proper and creative writing at every stage of childhood.

Children’s Books: I’m pretty picky about children’s books; if I don’t enjoy it, I don’t want it in the house, because we’re going to be reading it at least 17 times a day till it goes back to the library (I’m talking to you, banal summary of a Batman movie that found it’s way into my canvas tote).

*Bedtime for Frances, Russel Hoban: The first couple times reading this to E at bedtime, I laughed out loud when Frances the badger sneaks into her parents’ bedroom and stands inches away from her sleeping father, staring silently till he wakes up.  Classic.

*Bee-wigged, Cece Bell: I didn’t have high expectations for this quirky book, but it had a surprise that made all of us laugh, and it is actually pretty sweet.

*Frog and Toad Together by Arnold Lobel on Audible: This is E’s choice whenever I offer to play an audiobook during lunch or while he’s doing some sort of art or craft-type play.  I never get tired of hearing Toad say that he can’t chase after his wind-blown List of Things-to-Do because chasing after the list is not one of the things on the list!

Listening: I used to daydream about being able to cherry-pick songs instead of having to buy entire albums; now I long for the time to experience a whole album at once!  Oh, well.  I’m embracing this time in my life when stopping to really experience a single song is accomplishment enough.

*Raffi’s version of “Octopus’s Garden”: I can’t tell you what a thrill it is to catch E singing a song to himself as he works away on a paper project or building blocks, and this one has been his most recent favorite.

*Neulore: “Shadow of a Man.”  I just really like this song.

*Melanie Penn: her song “Turnaround” has been in my head since I heard it on the Under the Radar podcast; the song is so well crafted I keep thinking about the ways the words, images, music, and metaphor work together.

*Ben Rector’s cover of Whitney Houston’s “I Wanna Dance with Somebody” made me stop what I was doing in the kitchen and just listen.

*The Emerald City video series on Soulation’s Ruby Slippers blog: philosopher and apologist Jonalyn Fincher, whose book on the feminine soul was an engaging, inspiring read for me last winter, has been posting v-logs, some of them interviews, and I love tuning in when I get on the elliptical.  I love how she integrates the physical, cultural, relational and spiritual; her questions and insights are sharp and keep me thinking for a long time afterward.

*Indian Home Cooking, Suvir Saran: although I haven’t actually tried a recipe yet, I enjoyed reading  this cookbook and drooling over the recipes, particularly the vindaloo, which I plan to use as soon as I can get a hold of the whole spices required.

*Cauliflower Couscous: I’ve made Cauliflower “rice” a few times, but wanted to see if I could get good results with a simpler process, and I liked the results even more.  Just put some chunked-up cauliflower in the processor, pulsed several times till it resembles couscous, then saute for a few minutes in olive or coconut oil, maybe a little butter, and season to taste.

*I first tried these green olives a couple months ago and I am hooked.  They are fruity, kind of like ripe black olives, only fresher tasting.  I like them for a tide-me-over-till-dinner snack. 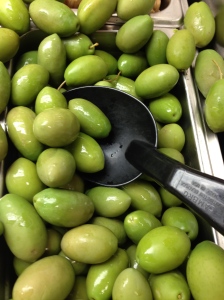 *flourless peanut butter bars (I’ve also tried them with almond and sunbutter) have been my go-to “healthy” treat this month: I decreased the honey a bit since our p.b. had some already, and they were great.

*It’s finally cool enough to use the oven, and so I’ve made pumpkin pies.  I usually use the recipe on the back of the can (Libby’s), doubled for two pies, but substitute one can of coconut milk for the two cans of evaporated milk (so about 1 cup of milk per pie instead of 12 oz.) and decrease the sugar.  I like the richer, denser filling that results from those changes, and even though Quint said, “Make it EXACTLY like this from now on,” last week, I’m experimenting with maple syrup and dates to see if I can get a version we like that’s free of refined sugar.

*I purged my closet.  For.  Real.  I’ve made several attempts in the past year, always shutting down mentally and then returning most of my clothes to my closet and drawers.  This time I was ready to be ruthless, but needed moral support, so I enlisted my husband’s help and he empowered me to donate two garbage bags full of clothing that was ill-fitting, unflattering, unsuited for my daily life or otherwise Just-Not-Right.  He even cleaned the closet for me while it was empty.  It was a huge burden that seemed to be parked squarely on my shoulders for a long time, and now I know that I have exactly one pair of non-maternity jeans that have no holes and kind of fit.  I think I need a personal shopper.  Any takers??

*A couple weeks ago, I made the goal of playing my guitar every day, even if only for five minutes.  It’s been a gratifying outlet.

*We visited the pumpkin patch with friends. 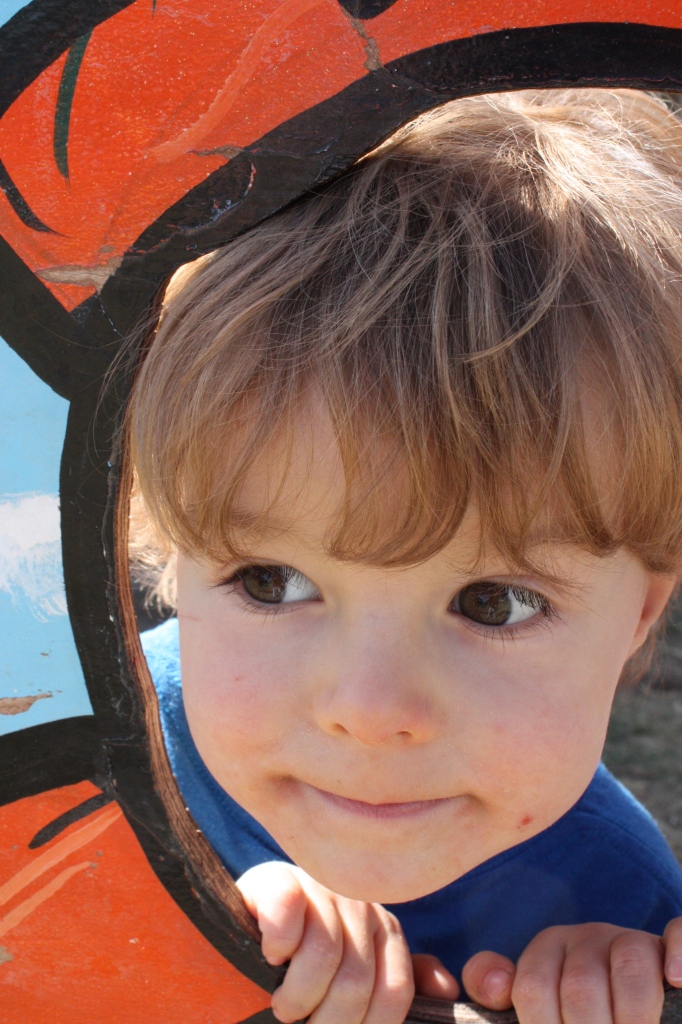 *The Spoonk: Quint’s sister had one of these acupressure mats when we visited them this summer, and Quint immediately ordered one and uses it almost every day to decompress.  I didn’t think I would get much use out of it, but I really enjoy lying on it and listening to a few moments of music after the kids go to bed to help myself relax.  It breaks up some of the tension in my back and helps me transition to bedtime.

*We’ve made story time at the library part of our routine, and it’s been great.  My high-energy preschooler sits engaged with the stories and finger-play songs, and brags to his daddy later that he’s the “quietest thing in the room!”  (quoting from recent fave Bedtime for Frances).  And just when his younger brother has reached the limit of his attention span, they break out the puppets, to his delight and my relief.

PS, this post took me longer than I expected to complete; my husband says when it comes time to record what I did in  November, I can just say I did a blog post about October 🙂